How to Overcome Indecisiveness that Robs You of Opportunities

Help you identify how indecision you may not even know you have is holding you back from immense opportunity in your life.

Do not fear mistakes.  There are none.

Mindset shift action: dig into your limiting beliefs that hold you hostage

Them:  What do you want to eat tonight?

Them:  It doesn’t matter to me.

Me:  It doesn’t matter to me either.

Them: So, any thoughts?

The Root of Indecision

I have written no less than 20 lines to start this blog post and deleted them all until this one.  For each attempt, I typed something, stopped, waffled about whether it was good or not, then eventually deleted it.  Finally, sick of feeling stuck , I just typed the first thing that came to my mind.  Okay, I’m 4 sentences in – this feels better.

Decision made.  Stop overanalyzing, stop overthinking and just move on.  Was this the correct decision?  Not sure yet…but I feel pretty calm and the words are flowing now, so I’m going to roll with it.

The root of indecision lies in our fears and our doubts.  We worry about the outcome of our decision or not having enough information to make an informed one.  As a result, we have an internal tennis match with ourselves that is oftentimes exhausting.

Ever hear of Buridan’s Ass?  It’s a story about a donkey who is presented with two delectable bales of hay.  The donkey, in a quagmire of indecision, absolutely cannot make a choice about which bale he wants to eat.  As a result, he dies.

Have time for another small tale?

Once upon a time, there were two frogs.  Nearing the end of a long journey to a new watering hole, a thunderstorm rolled in.  The frogs, being frogs, loved the rain and happily hopped along, dreaming of their future home.  As they were traveling on a dirt road, they had to navigate the deep ruts left by the occasional car passing by.  Suddenly, one frog fell into a rut and was soon followed by the other.

One of the frogs took a look around and thought for a moment.  Then, he jumped out, landing back on the road.  The other frog frantically hopped back and forth, unsure what to do.  “Jump out,” the frog on the road said.  “I can’t,” said the frog in the rut.  Eventually, road frog got tired of waiting and continued on to their new home.  A few hours later, rut frog showed up at the watering hole.

Indecision is a Decision

The issue with indecisiveness goes beyond just the pure annoyance that comes with it.  It is the missed opportunities that come while you are feeling unsure and stuck.

Want a concise plan to help you make a decision?  Click here ⬇ 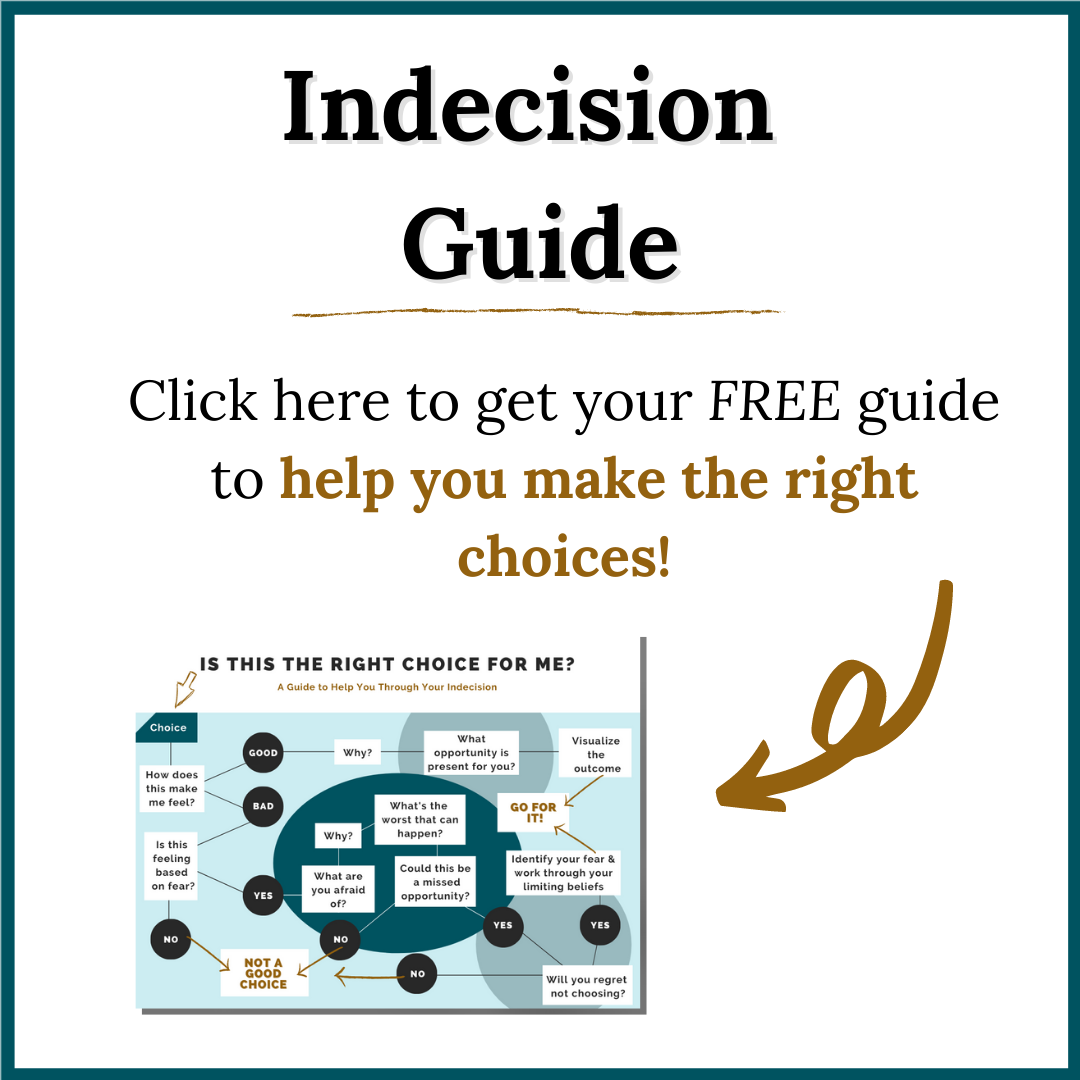 How to Improve Your Indecisiveness

As I mentioned before, most of our indecision stems from fear.  Fear of releasing control, fear of uncertainty, fear of making a mistake, fear of being seen, fear of what others think, fear of (insert your fear here).  The first step forward is to know why you are having such a hard time deciding.

What is your definition of failure?

Forget about your parents or society’s definition of what it means to fail.  What does failure mean to you?  Take off the layers of conformity you have placed on yourself over the years.  It’s time to get raw, unfiltered and real.

What are your emotions telling you?

In case you didn’t know, your body is amazing.  Possessing the ability to give you instant feedback, understanding how to identify and read the clues it gives you is a superpower.  In helping you make a decision, pay attention to the emotions you feel and where they show up in your body.  For each of your choices, see how your body reacts.  Do you feel light and expansive or tight and restricted?  Unless you are specifically paying attention to the feedback you are receiving, it’s easy to miss in the cloud of overwhelm usually present when making a hard decision.

Sometimes, our indecisiveness stems from feeling rushed and pressured to make a decision right now.  Overwhelmed and feeling out of control, the easiest way to step outside of this cloud of uncertainty is to take a step back.  A lot of the decisions we are faced with don’t have time constraints other than the ones we set or allow others to set for us.  Walk away and take a breather when you feel unsure and pressured.  It’s okay to take the time you need to make a decision that is right for you.

Oh, excuses, how the indecisive love them!  When feeling overwhelmed by pending decisions, even the best among us turn to the reasons why we can’t make a decision.  “I’m not picky, you choose where we eat”,  “I’m too busy”, “I’m a perfectionist”.  Whatever your excuse of choice is, it’s just that – an excuse.  A reason to justify your indecision.

Want a concise plan to help you make a decision?  Click here ⬇

Who is this decision for?

How many times do you find yourself making a decision simply to avoid conflict?  Or because it is the socially accepted choice?  If it is often, it’s past time to take responsibility for your own life.  No wonder it is hard for you to make a choice since you not only have to take into account your own feelings but those of everyone around you!  Make a conscious decision right now to clear the noise.  Get rid of everyone else’s voice except your own.

What is your mindset?

A lot of times, a simple mindset shift can do wonders for helping you make a decision.  For example, when you doubt whether you believe you can make a good decision, this is a red flag to uncover the limiting belief that causes you to feel this way.  When you do, you can rewrite this belief into something that won’t hinder you, redefining your entire experience with decision making and toppling your I’m not good enough mindset.

Probably my biggest hot button, I feel that labeling things as good and bad cause more problems than it helps. First off, who decided what was good and what was bad?  Now don’t get me wrong, I am not talking about big stuff like murder.  I am referring to the labels society places on decisions that keep us handcuffed to conformity.  I, for one, am sick of such black and white living.  There is no one size fits all in my opinion, what is good for one may not be good for another.  This is why it is essential to challenge your beliefs as you make decisions and truly connect with your intuition to see what is right for you.  This is especially important if you face crippling indecisiveness on a daily basis.  Make your own rules.

Will I regret this?

Whenever I find myself in the middle of massive uncertainty, I stop and ask myself:  When I am on my deathbed, will I regret this decision?  But you must go deeper than the surface when asking this question.  Beyond the ego (who is fear based and wants to protect you from short term uncomfortableness), it is necessary to descend into the space of intuition (where your soul lives, your higher self that sees the big picture).  Go past the short term consequences of a decision you make that chances are, won’t matter a year from now.  It’s so important to choose based on your soul path and what you are here to do.  Every choice is an opportunity to move you further along your path.

Which way are you going?

What do you want in life?  What are your dreams and aspirations?  Clarity of purpose is essential as you move though daily life making decisions and grabbing opportunities.  Knowing where you are headed makes decision making a lot easier.  Think of it this way, would you take a road trip across the country without having any idea of what direction to start driving?  If you would, make sure you have plenty of time and gas money.

Visualize the outcome as if it already happened

Imagination is a beautiful thing.  Everyone has one and even if you feel you aren’t creative or imaginative, all you have to do is practice cultivating yours.  You can easily do this when faced with decisions.  For each possible path, visualize the outcome and what you might find if you take that route.  Don’t forget to use the tips we talked about above to help you move through fear roadblocks and emotional responses.  Eventually, with practice, you will become a pro at knowing which decision to make solely based on what you see in your mind’s eye.

Related Reading:  The Quickest Way to Manifest Your Dream Life

There are No Mistakes

Whatever your journey to decisiveness looks like, I want to stress that there is no wrong choice.  Ever.  Each and every decision you make will always lead you to exactly where you need to be.  No matter what happens, there is a lesson waiting for you to discover on all paths and it is up to you to learn from it.  If nothing else, remember this as you go about your day:  Indecisiveness is a waste of energy because in the end, the choice you make is the right one.

I want to know!  What choices have you made today that are moving you closer to where you want to be?

Proud introvert, intuitive entrepreneur, and spiritual activist. On a mission to embolden my fellow introverts to quietly change the world.

Get instant access to the tools you need to build confidence and courage so you can live a purpose aligned life.

8 Ways to Identify Your Shadow and Why It’s Important

Why Balanced Energy Is A Must To Live Your Best Life

10 Surprising Ways Tarot Shows You How to Be Yourself

How to Set Healthy Boundaries: Lessons from the Tarot

How to Know if Your Shadow Work is Working

How to Be Creative and Manifest Abundance

7 Important Things to Do Immediately After a Tarot Reading

How The Law Of Attraction Changed My Life

Manifesting: What You are Doing Wrong and How to Fix It

Shadow Work: Why it’s So Hard and How to Make it Easier

2 of Swords 2 of Wands 6 of Cups 7 of Swords Acceptance Action Plan align Alignment authentic Celebration Confidence Conformity Control Dream Life Ego Fear freedom Goal Indecision Intention Justice Knight of Wands Magic Meaning Milestone Mindset Routine self-care Tarot for Beginners Temperance The Devil The Fool The Hanged Man The Hermit Vibration
We use cookies on our website to give you the most relevant experience by remembering your preferences and repeat visits. By clicking “Accept”, you consent to the use of ALL the cookies.
Cookie settingsACCEPT
Privacy & Cookies Policy

Any cookies that may not be particularly necessary for the website to function and is used specifically to collect user personal data via analytics, ads, other embedded contents are termed as non-necessary cookies. It is mandatory to procure user consent prior to running these cookies on your website.